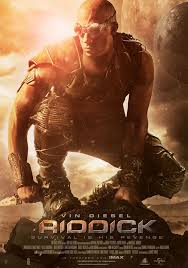 I give Vin Diesel a lot of credit. He loves the character of Riddick. I'm glad he finally decided to make another movie. I heard he even contributed to the budget of the film. That's dedication. Let him keep making Fast And Furious movies (another series I love as well) if it allows him to make more Riddick movies.

Loved it. I like that they went back to a more basic story, a la Pitch Black. Now I liked The Chronicles Of Riddick, I liked the wider scope the movie. That said, Riddick had his more epic story with that, and it was time to get back to basics, and that's what this movie did.

Riddick is stranded on a planet, and needs to get off. The first part of the movie is just about him surviving, but he knows he needs to get off this rock, so he pulls a very Riddick type move, and a way presents itself. From that point, we get the mercenaries. Are they cliche characters? Yea, but they work in this movie. Without spoiling it, one character's identity came as a pleasant surprise to me.  The rest of the movie is Riddick being Riddick, putting his plan in motion through stealth, violence, & misdirection. Good bits of humor, good action sequences, all building up to an inevitable climax with some pretty nasty creatures.

The effects were quite impressive considering the movie's relatively low budget. Loved the creatures. To me, it looked as good as other movies costing twice or even three times as much. Now that's getting the most out of your budget.

Performances were solid all around, with nobody being what I would call outstanding, but I was totally buying that these people were their characters. Of course, Diesel was, well, IS Riddick.

Now, was this cheesy pulp sci fi? Yup. But it totally worked for me, because that is what Riddick is. It was exactly what I expected and wanted out of another Riddick movie, just a good time with a character I really like.

More please.
Posted by Chris at 6:50 PM No comments: